Brought to you by our sponsor…

Rising from the Ashes

Up until about 20 years ago, Downtown Detroit was the closest thing you could get to a modern ghost town. Most residents had moved in the late 1960s due to racial tension and the shift of jobs out of the city. Skyscrapers, shops, and streets alike were all vacant, derelict, and occupied by vagrants. Corrupt and misguided leadership decided that the solution to these issues was to tear down buildings or literally paint over them. The city’s destruction sparked its revitalization. Developers saw a downtown space that provided them with low-cost buildings and a nearly blank canvas for any project. This began with the restoration of the Fox Theatre in 1990. Ten years later, the construction of Ford Field and Comerica Park saw the city’s first entertainment and sports hub take shape.

Over the next decade, the city slowly climbed back. The historic Woodward Avenue was once again lined with shops and restaurants. Offices began leasing space. Younger demographics started moving into trendy lofts and apartments. Outside of Woodward Avenue, however, the city was still largely undeveloped. There were miles of parking lots, derelict buildings, and fields where high-class neighborhoods once stood. Until this space was filled, the rebuild would be incomplete. 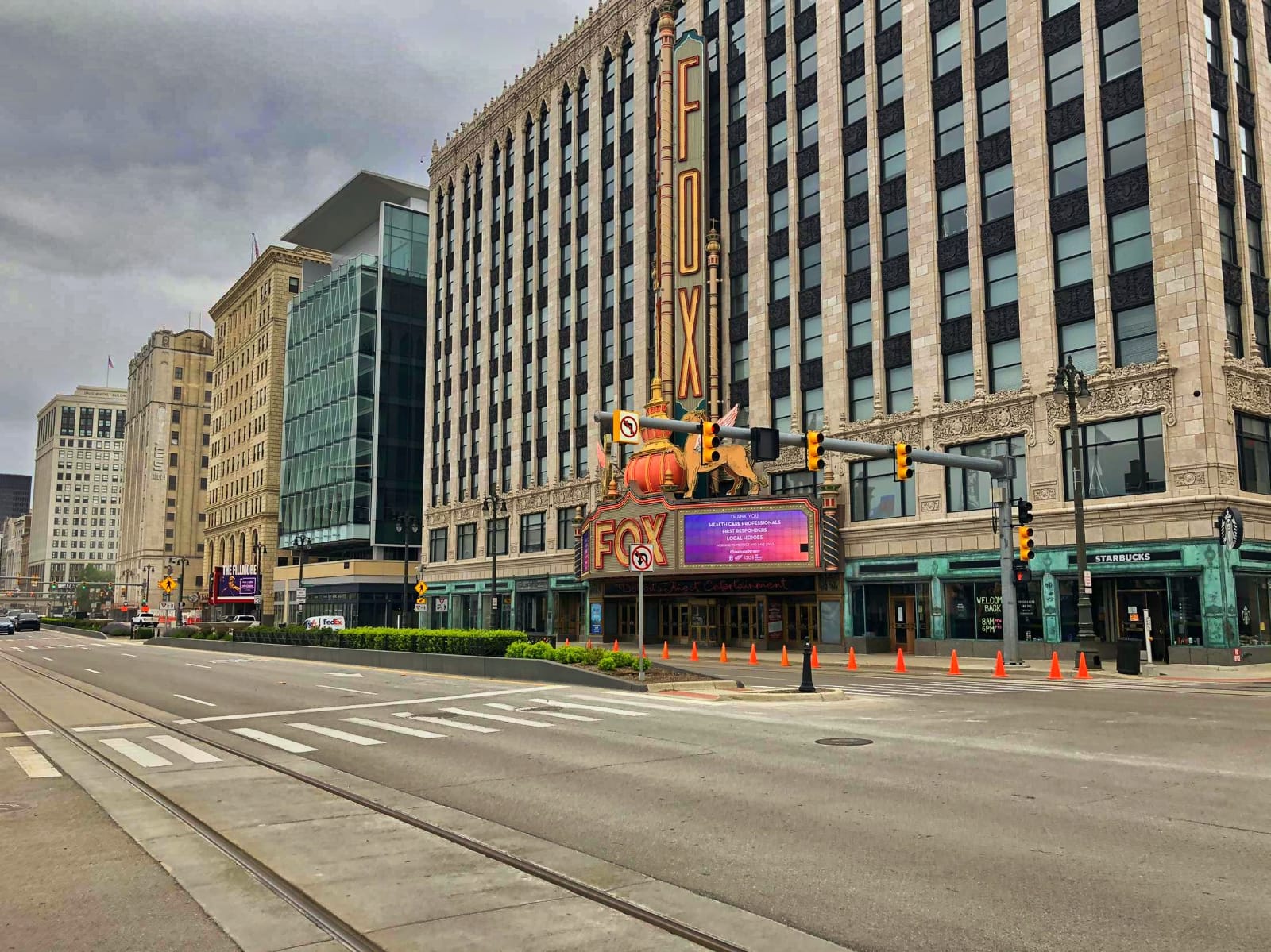 The Grand Restoration and Some Deja Vu

*the Ilitch family, Ilitches, and Olympia are used interchangeably in this article

Enter the Ilitch family in 2014. Mike Ilitch, the son of Macedonian immigrants, had built the Little Caesars pizza empire from the ground-up with his wife Marian. The homegrown billionaire owned both the MLB’s Detroit Tigers and NHL’s Detroit Red Wings. At the time, the family’s NHL franchise was playing in the 40-year-old, crumbling Joe Louis Arena. “The Joe” was surrounded by a labyrinth of concrete and steel that isolated the stadium from the rest of downtown, despite being only one mile from the city’s center.

The Ilitches and their entertainment and sports branch, Olympia Entertainment, proposed a plan to the city of Detroit. The Ilitches wanted a new stadium. The city wanted development. Olympia could provide both. Olympia coincidentally owned a 50-block expanse of desolate lots. The company had a plan that meticulously outlined a massive development for the city. Five neighborhoods would bring office space, retail, and residential space downtown centered around a state-of-the-art arena. The plan could be completed almost entirely in three years. Detroit had never seen anything like it. 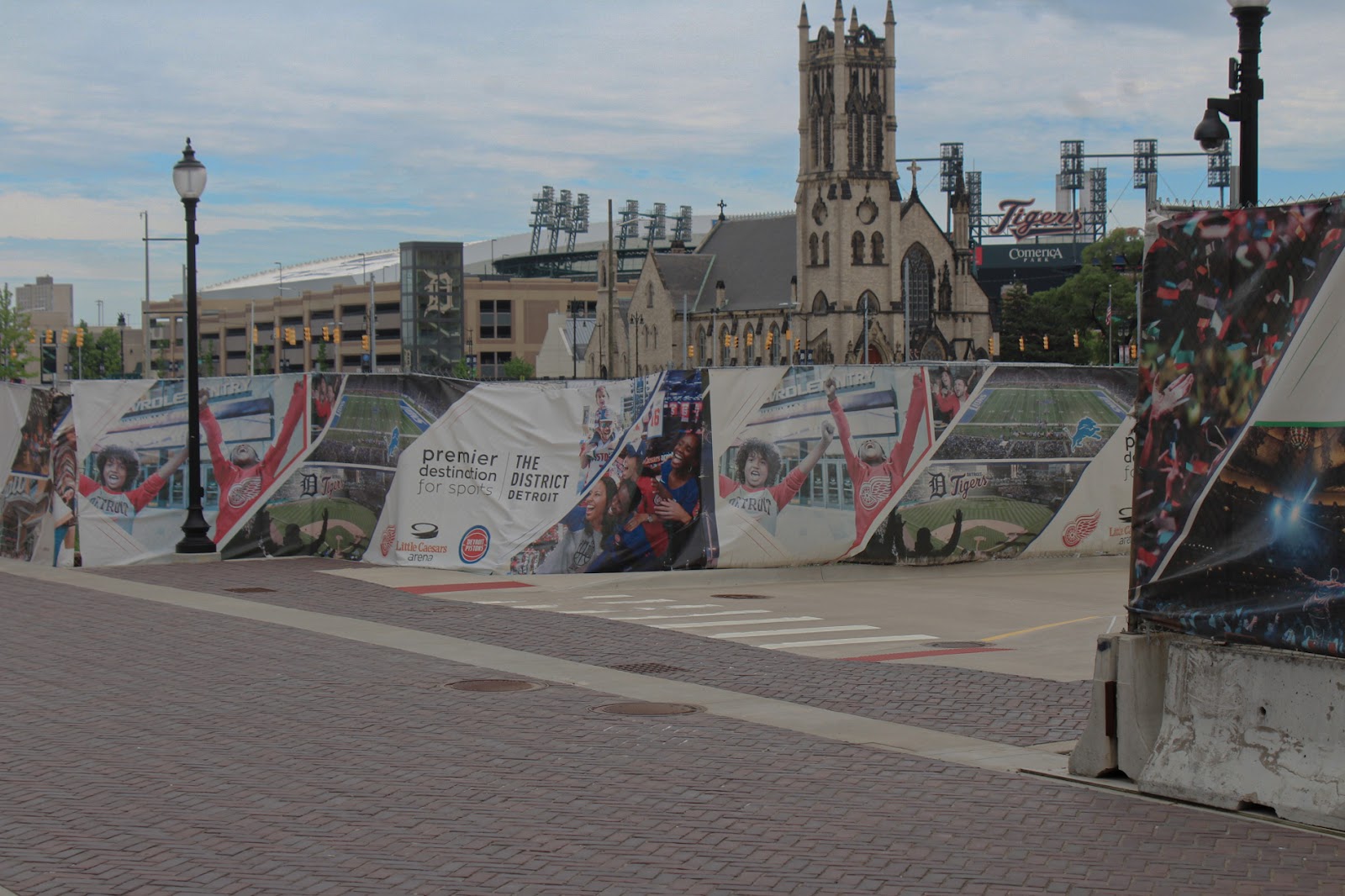 A look northeast from LCA. Comerica Park, Ford Field, and multiple parking structures can be seen

Except, it actually had 20 years prior, from the same people. A 1994 plan outlined by Olympia had a similar layout to District Detroit, except across the I-75 freeway from the District site. In the mid-90s, the city was unwilling to meet  Ilitch’s demand for money or property. The aforementioned Comerica Park was a compromise on the deal.

Towards the turn of the 21st century, it appeared the master plan Until the greatest “coincidence” in history occurred. Random, faceless LLCs began to buy vast amounts of properties downtown. These LLCs must have not wanted competitors to figure out that they were buying properties for well above market value in a poverty-stricken area of town. They required that all sellers sign an NDA. With low overhead due to operating out of post office boxes, these corporations had to have had a fair share of spending money: 56 properties were purchased for a total of $50 million.

The City of Detroit probably became worried that so many nondescript companies were looking to overtake Ilitch. The Downtown Development Authority gifted Olympia with 74 properties to develop in the area. When it came time for the District plans to be given to the city in 2014, the property belonging to the “LLCs” somehow became the Ilitch-owned.

But, the city didn’t seem to mind this wild “coincidence” nor the caveat in Olympia’s plan. Olympia didn’t want to pay for it. They were also uninterested in continuing revenue-sharing that had existed at The Joe. Officials decided they would finance the district- with money the city didn’t have. Desperately, Detroit took $284.5 million dollars out of its school property tax fund. Detroit Public Schools are some of the poorest and most underfunded in the nation. According to the Detroit News, only 7 percent of children in the city can read at or above grade level. School facilities are rotting and in desperate need of repair and resources. The city turned a blind eye and signed on the dotted line. 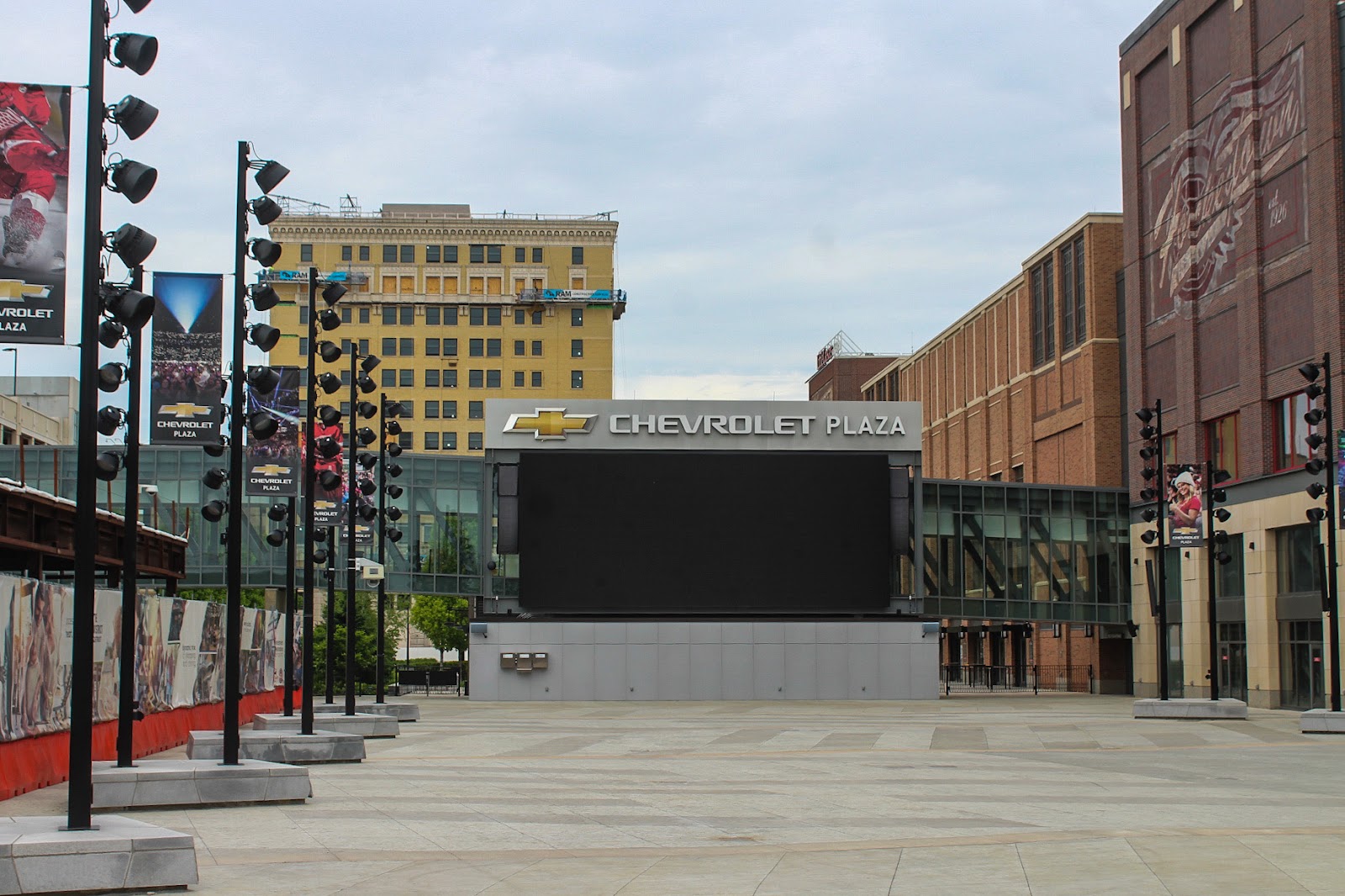 The Chevrolet Plaza outside of Little Caesars Arena. The still-vacant Hotel Eddystone looms in the background

Ground was broken on the project in September 2014. The Ilitches promised 184 residential units would be completed when the arena opened. In the early stages of arena construction, the city and preservationists allowed the demolition of the historic Park Avenue Hotel. The July 2015 implosion came with an agreement that the neighboring Hotel Eddystone be restored 18 months after the stadium was completed

Progress continued on the arena as planned. The Ilitches awarded the naming rights of the stadium-to themselves. The District Detroit would have its centerpiece known as Little Caesars Arena (LCA). A big selling point of the stadium was eliminated with this move. Instead of a high-tech roof that would display the logo of teams or pictures of performers at an event, the Little Caesars logo would be plastered on the stadium’s dome. It was a blatant show of the family’s power: A giant Ilitch mascot in the center of an Ilitch-owned stadium in the middle of Ilitch-owned land.  As LCA rose, Tom Gores, owner of the NBA’s Detroit Pistons, announced the team would be moving from the Palace of Auburn Hills to downtown. The District had now negatively impacted a suburb that had nothing to do with the original plan.

The Pistons would be basically paying rent to use an arena staffed by Olympia employees. This meant long-time Palace staff were now out of jobs. Those in the higher-paying front office who were retained had to commute 40 minutes and were subject to the City of Detroit’s income tax. The majority of people brought over weren’t moving to Detroit. Most weren’t going to stay downtown after work, either. In this process, a perfectly good stadium was demolished. Ironically, the move took more jobs to the suburbs as the former Palace location is being converted into office space. 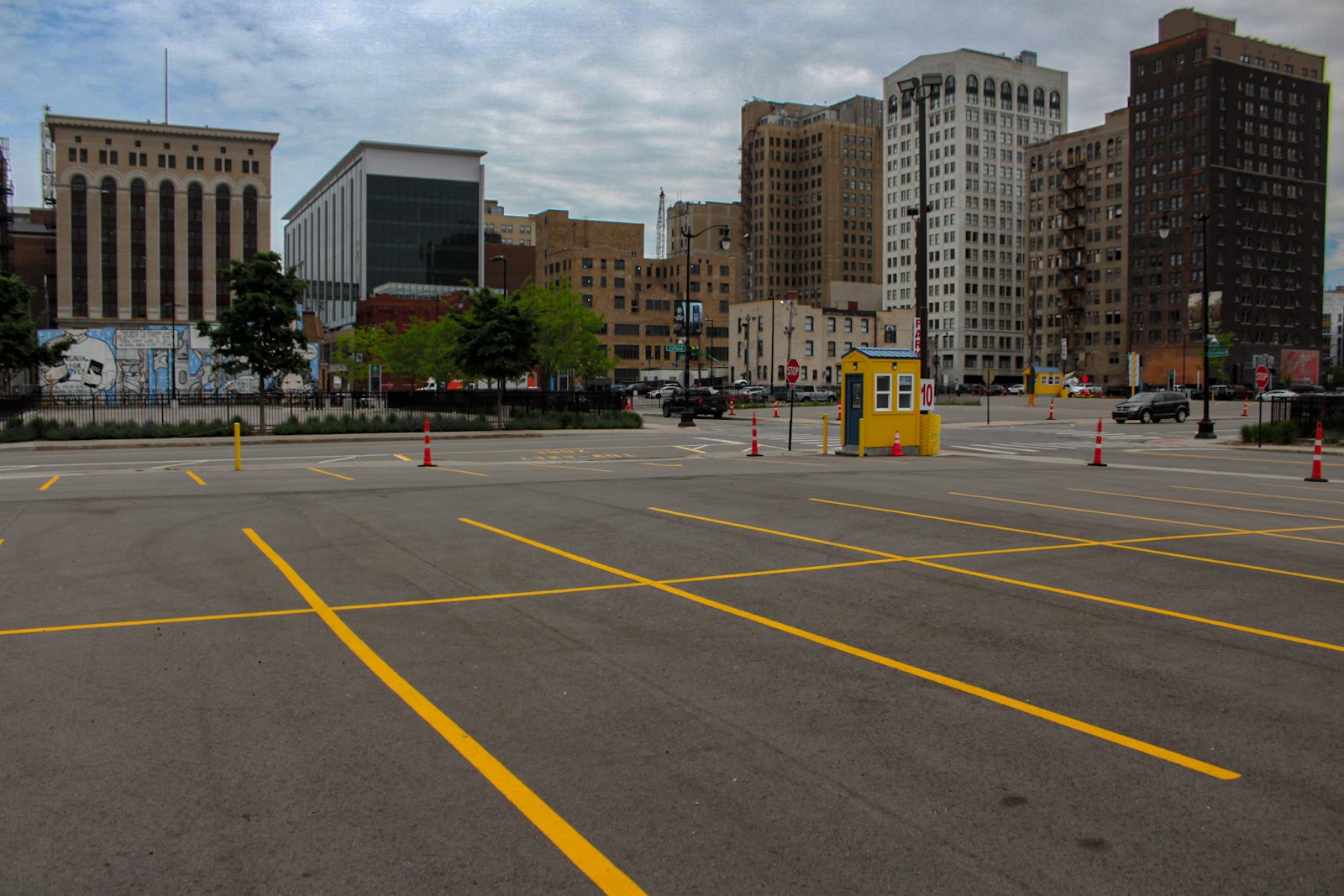 Towards the end stages of LCA’s completion in 2017, Olympia announced major plans for the District’s housing development that included the revitalization of two historic buildings. Construction never began and zero residential units have gone up as of now. Olympia has continued to ask for more money from the city. The company knows its leverage. Detroit cannot force them to do anything. Hence an active offer of $74 million if Olympia develops the area. Yet, the Ilitch family continues to do nothing. The arena is still surrounded by parking and little else. It appears that rather than develop properties, the company is content with slapping pavement down and collecting additional revenue. It is more profitable and easier to maintain than a complex, mixed-use high rise, right?

Well, not exactly. The city of Detroit itself is operating on flawed zoning laws that require vast amounts of parking for new developments. For every six seats in an arena, there must be one parking spot within 1000 feet of the complex. Given the arena’s capacity, that is roughly 3,400 spots. Similar accommodations are required for housing and retail. It is this outdated language that has been the Ilitch reasoning for the lack of development, namely the sea of concrete where the Columbia Park neighborhood should be. Detroit has not helped as the ordinance is still enforced despite the lack of progress it promotes. Unfortunately, the city has not provided a single viable mass transit option to eliminate large amounts of cars from the area. Detroit’s newest development has seen little ridership compared to early estimates. Bad mass transit is a gaping issue for Detroit. This problem was even cited by Amazon when it eliminated Detroit from contention to host its next headquarters. 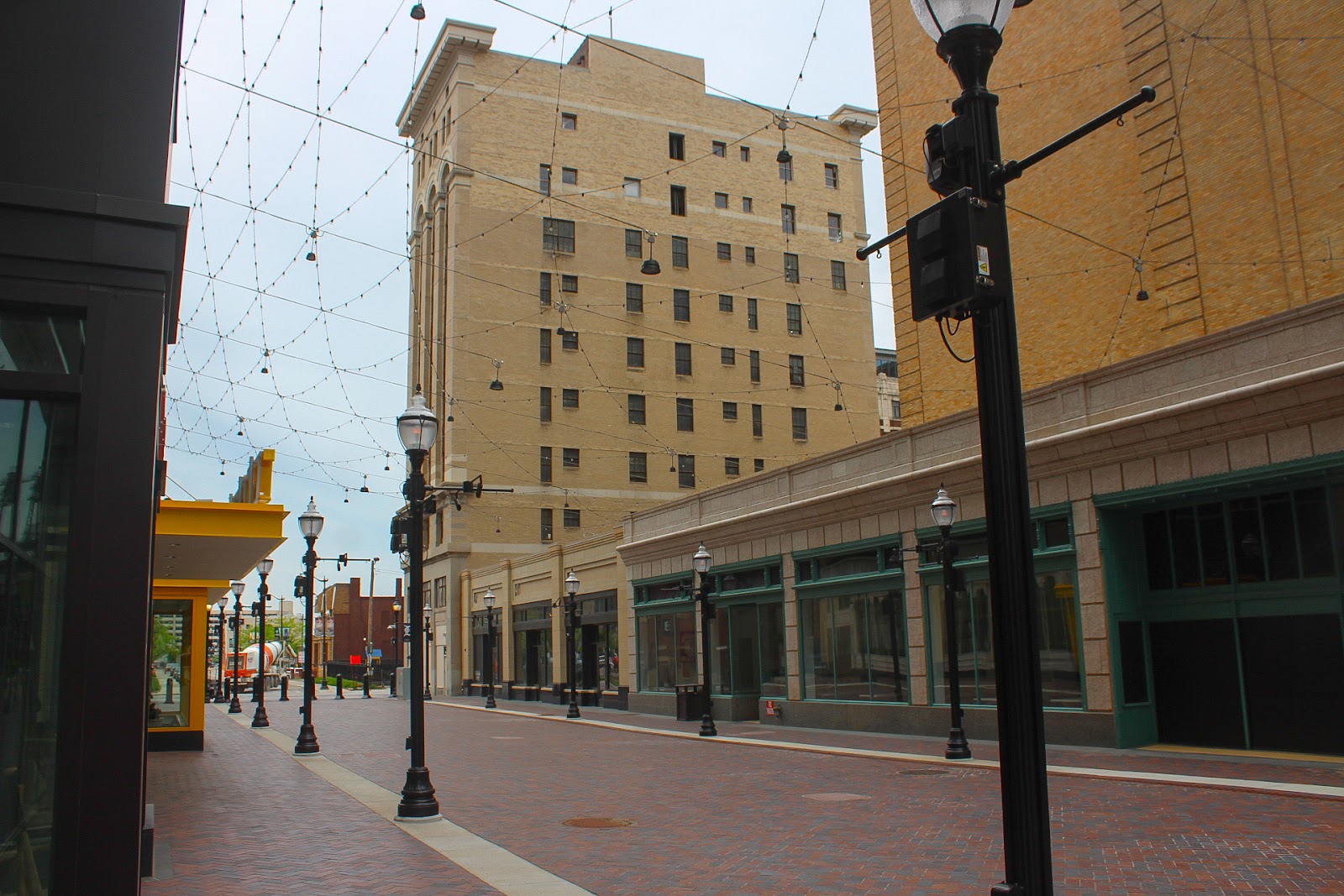 While parking issues may explain why larger projects are incomplete, it does not excuse the fact that nothing else has been done on Olympia’s part. The company, which for years dealt with Detroit and its zoning laws, had to have known about these ordinances. They certainly do not excuse the blatant disregard for the state of the area around LCA. The blank wall of the arena’s west parking garage resembles 1980s Berlin rather than a lively arena district.

The pothole-lined streets that wind around lots stacked high with concrete, dirt, and rotting buildings look exactly like they did before the arena was built. Even the Columbia Street project (merely a block or two long) only has two tenants. The company doesn’t care for development anymore. If Olympia really wanted change, they would have put money towards fixing bad zoning laws rather than constructing the new Little Caesars HQ or Mike Ilitch School of Business.

The Ilitches have made as many announcements to restore their Hotel Eddystone as there have been new luxury hotels in the area. Olympia has torn down a multitude of new buildings while the city has seen countless others rise up. 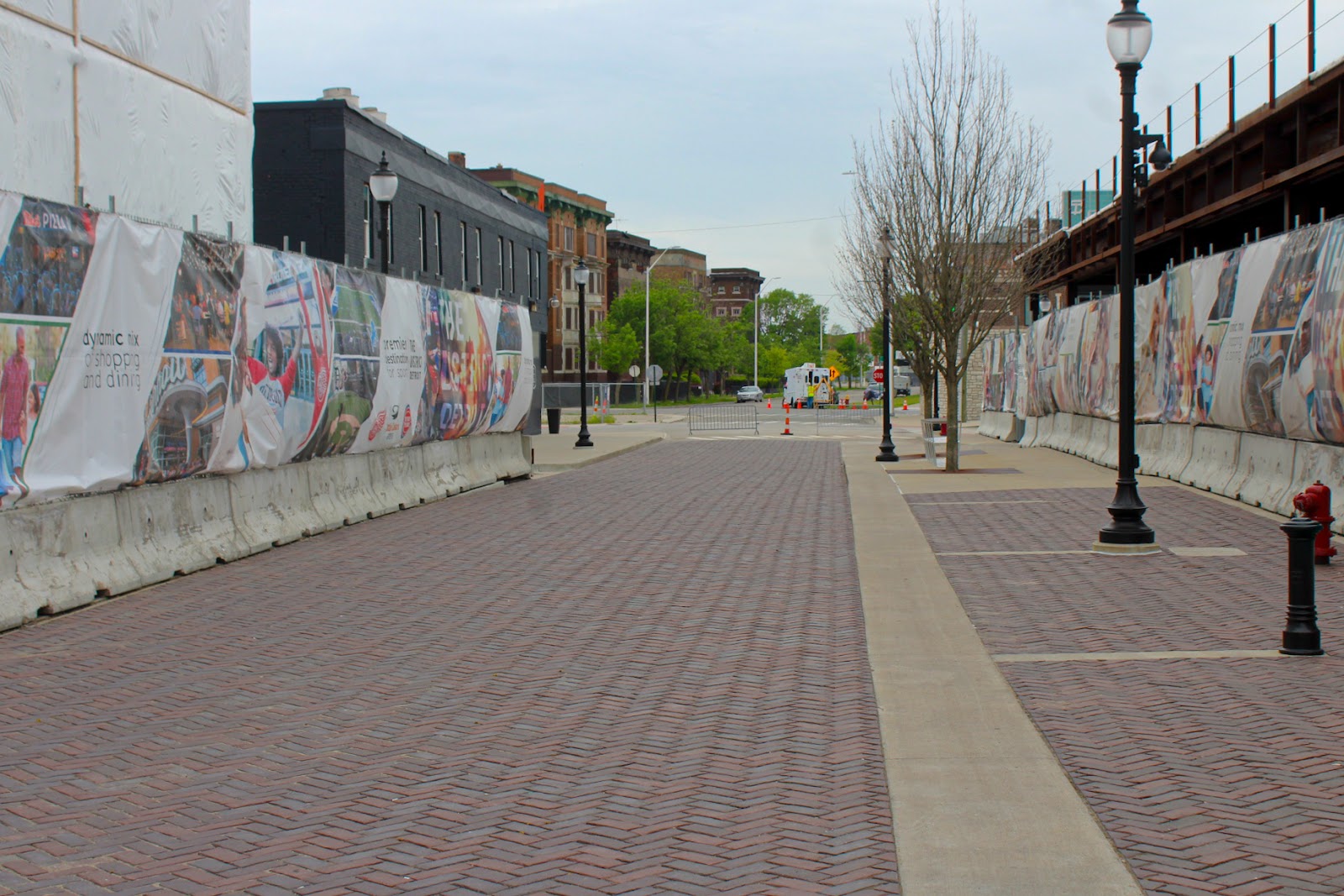 Contrast this with another billionaire Michigander: Dan Gilbert. The businessman has had his Quicken Loans HQ in Detroit for years. His Bedrock development wing is building Detroit’s newest skyscraper and has restored two massive towers in the city. The only restored Ilitch buildings were fixed over three decades ago and are across the street from each other. Bedrock is also constructing a multitude of mixed-use properties. Gilbert has employed the use of parking garages with first-floor retail, a concept yet to be adopted by Olympia. 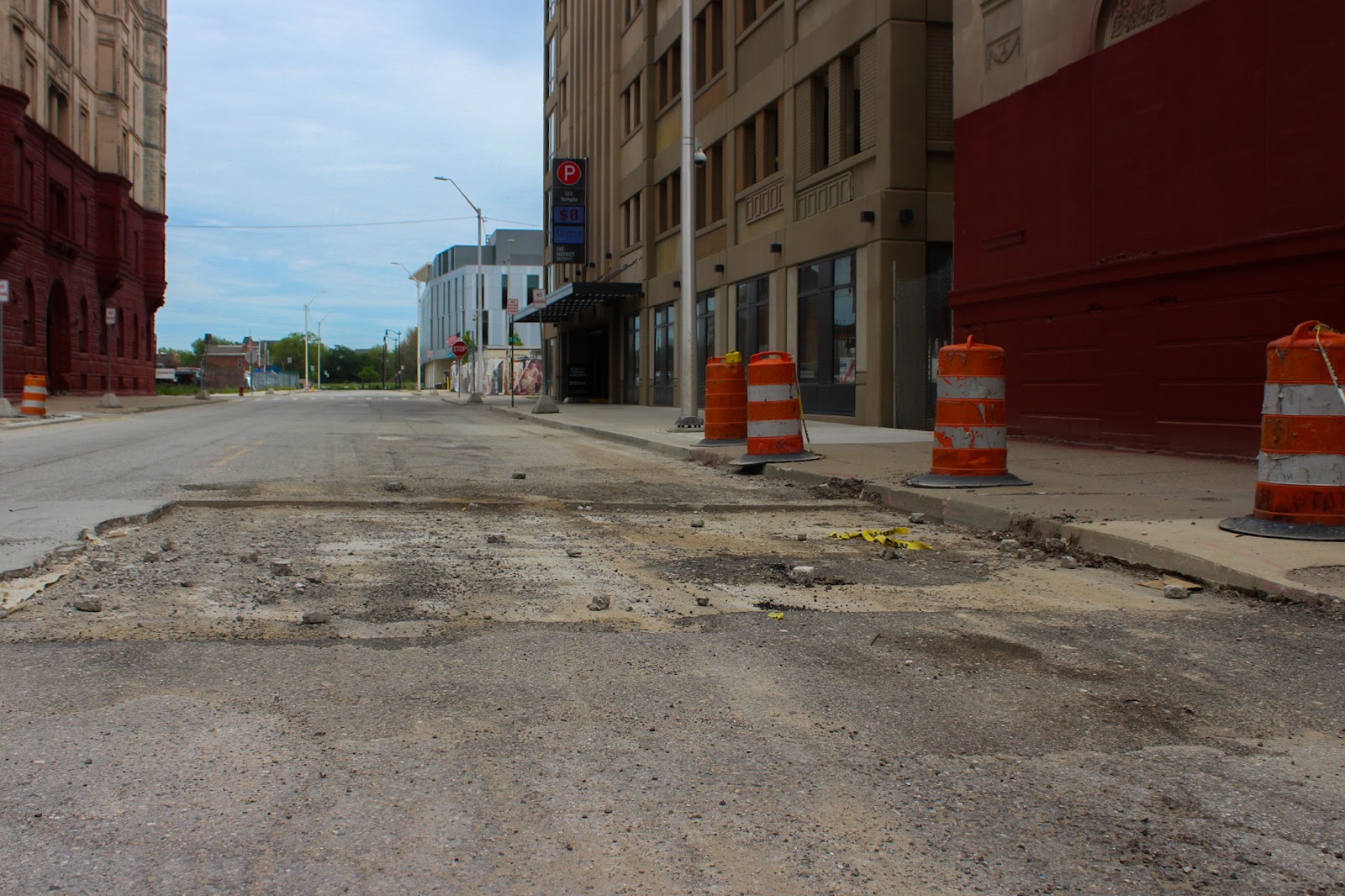 The concept of Olympia over-selling the city for their own gain is not a new concept. The MotorCity Casino and two other casinos were opened at the turn of the century in Detroit. Developers argued gambling centers would replenish long-forgotten areas of the city. So, Motown took a risk. MotorCity was placed in the run-down Woodbridge neighborhood not too far from downtown. The area did not change. The shiny design of the casino stood in stark contrast to the neighboring liquor stores and abandoned churches. The only gain seen in the city was increased calls to gambling addiction hotlines. The Ilitches acquired the property in 2005 and finally developed….their own four-star hotel that rose high above the poverty in the streets below. The nearly two dozen empty Olympia-owned lots around MotorCity today speak volumes to how much the family really cares about Detroit. 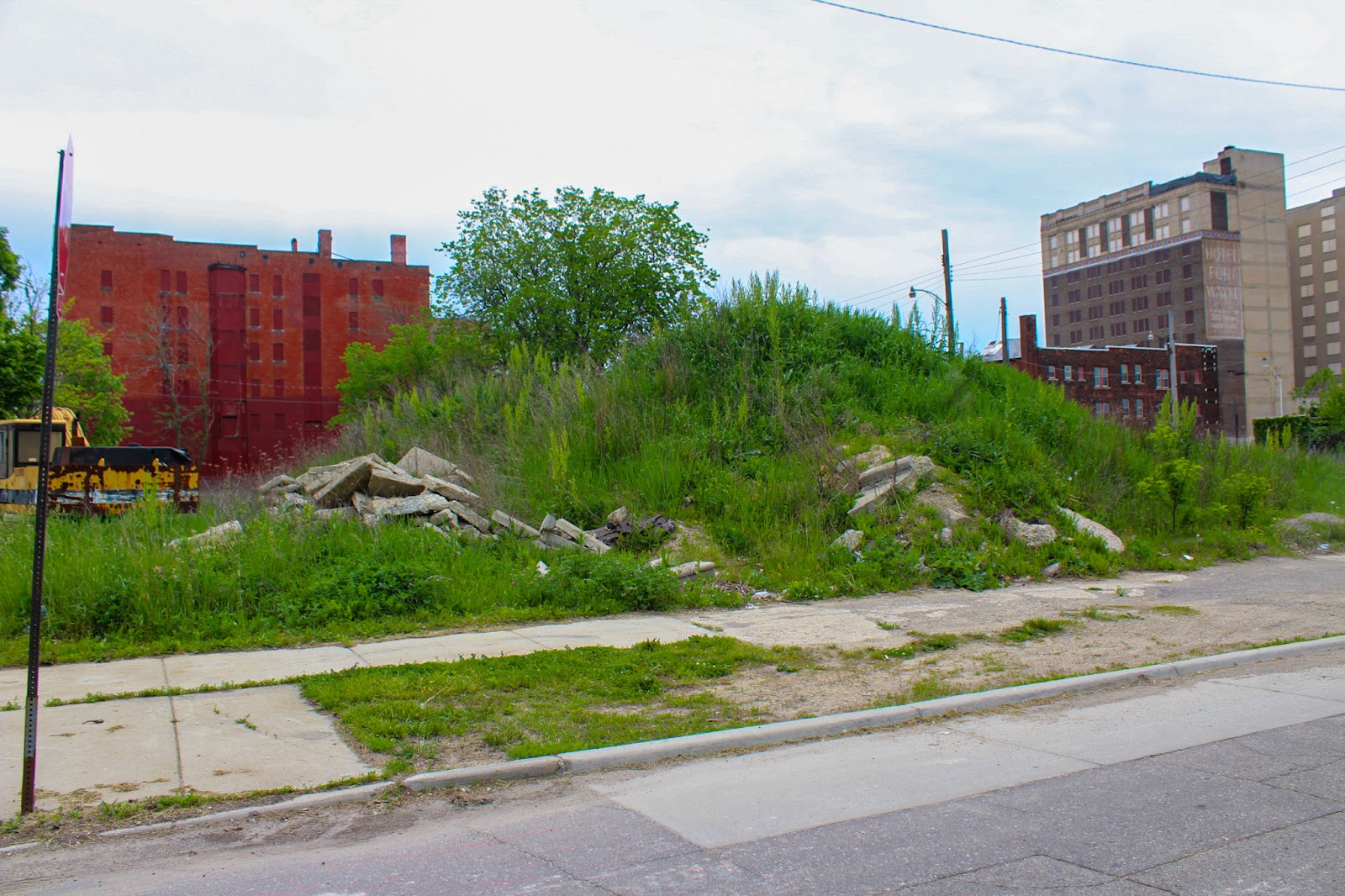 A pile of dirt and concrete debris on a block just a couple streets from LCA. The Hotel Fort Wayne, still boarded up, towers in the background.

The District Detroit was pitched by Olympia as an embodiment of the city’s turnaround. Instead, it exposed a darker system of greed, lies, and politicians who are unwilling to face real issues- an establishment that has pervaded the city since the 1950s. The mismanagement of the city has once again needlessly sacrificed the well-being of its citizens. Detroit’s desperation to return to its former glory has allowed for a handful of elites to control the city, often with no regard for Motown’s best interests. The construction of an arena owned by billionaires to showcase millionaires robbed citizens of a city that cannot afford a ticket to an event. Olympia and the District is not the solution. They are merely the pinnacle of terrible flaws the city has that will prevent it from rising from the ashes once again.

Enjoy the article? Share it with a friend and make sure to sign up for our daily newsletter keeping you up to date with everything happening in the sports world! Subscribe here

Didn’t enjoy the article? Feel free to let us know why by reaching out to team@morningblitz.com

This site uses Akismet to reduce spam. Learn how your comment data is processed.